How I Solved It: Tip: Finding More of the Story on newspapers.com 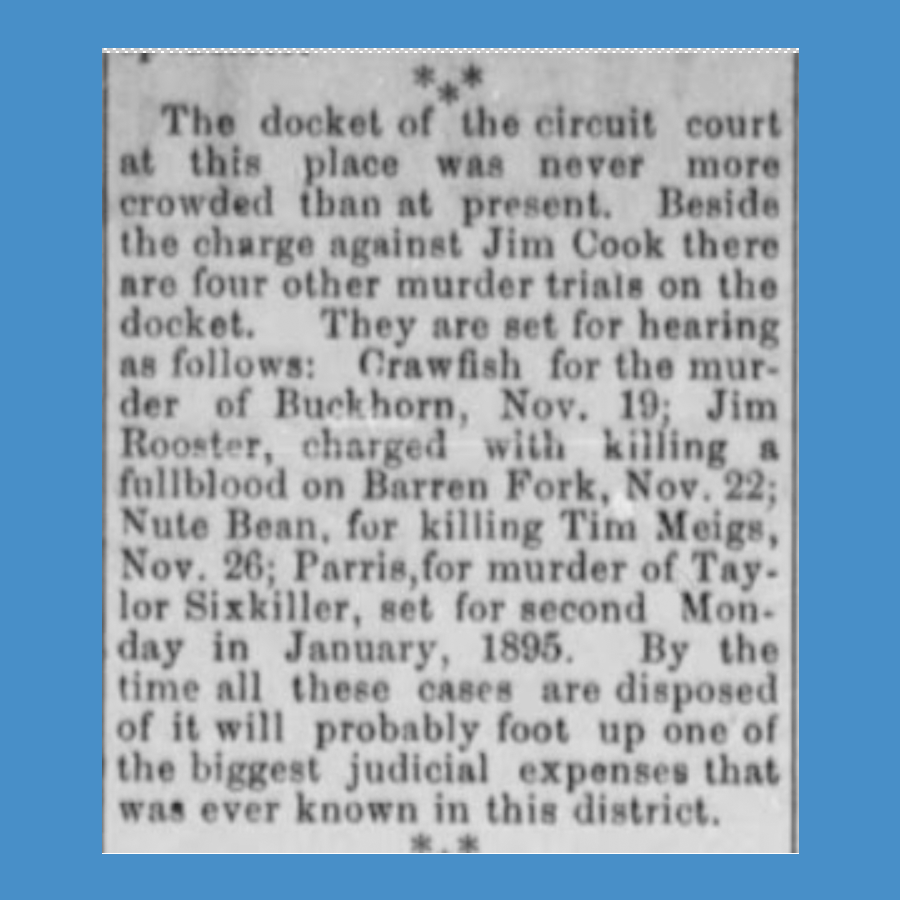 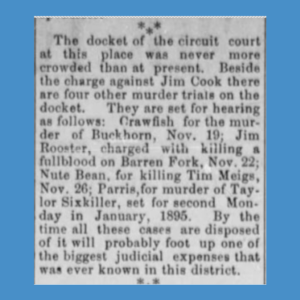 Dana Leeds, blog author from The Enthusiastic Genealogist, shares with us how a snippet found on a Newspaper site by a cousin led her to find more about the story with further searching.

Dana points out that three articles name the man by three different names, which reminds us to be creative with search strings, even with published sources!

This weekend I came across an article which had been clipped by a cousin. The newspapers.com article, dated 1894 in Tahlequah, Indian Territory, was regarding an alleged murder. It read: T[?]m Meigs, the young man who was shot last Thursday by Robert Bean, died Sunday morning. We have never heard the particulars of the shooting, hence we can not state them.

As I tried to find more of the story, I searched the site for “Robert Bean” and did not find anything. So, I tried searching for “Bean” and “Meigs” and found another short article. This article starts by stating “The docket of the court at this place was never more crowded than at present. Beside the charge against Jim Cook there are four other murder trials on the docket.” The article then lists the other murder trials on the docket including “Nute Bean, for killing Tim Meigs, Nov. 26.”

An additional search using the search terms “Tim Meigs” found one additional article. It stated: “Newt. Bean shot Tim Meigs last Friday morning near Park Hill, the bullet entering Meigs’ left breast near the heart, and it is thought will prove fatal. Both parties are Cherokee.”

Robert Bean, my husband’s 3x great uncle, was born in 1849 in the Cherokee Nation and was Cherokee by Blood. He is a sibling of my husband’s 2x great grandmother, Ellen Bean. Their mother, Frances “Fannie” Hicks, survived the Trail of Tears.

I would like to find the court record for this case, and also clarify whether Robert also went by Newt or Nute.

Dana Leeds started researching her family almost 20 years ago, though she started getting serious about genealogy education four years ago. Since then, she has attended 4 genealogy institutes - 3 at GRIP and 1 at IGHR - as well as taken classes through NGS, Excelsior College, the National Institute for Genealogical Studies, and, currently, BU. Three years ago she started blogging at The Enthusiastic Genealogist where she shares her discoveries and research tips. She plans on starting the certification process late next year. Visit Dana's Website