How I Solved It: A Detested Ancestor – Philemon Benjamin Hawkins 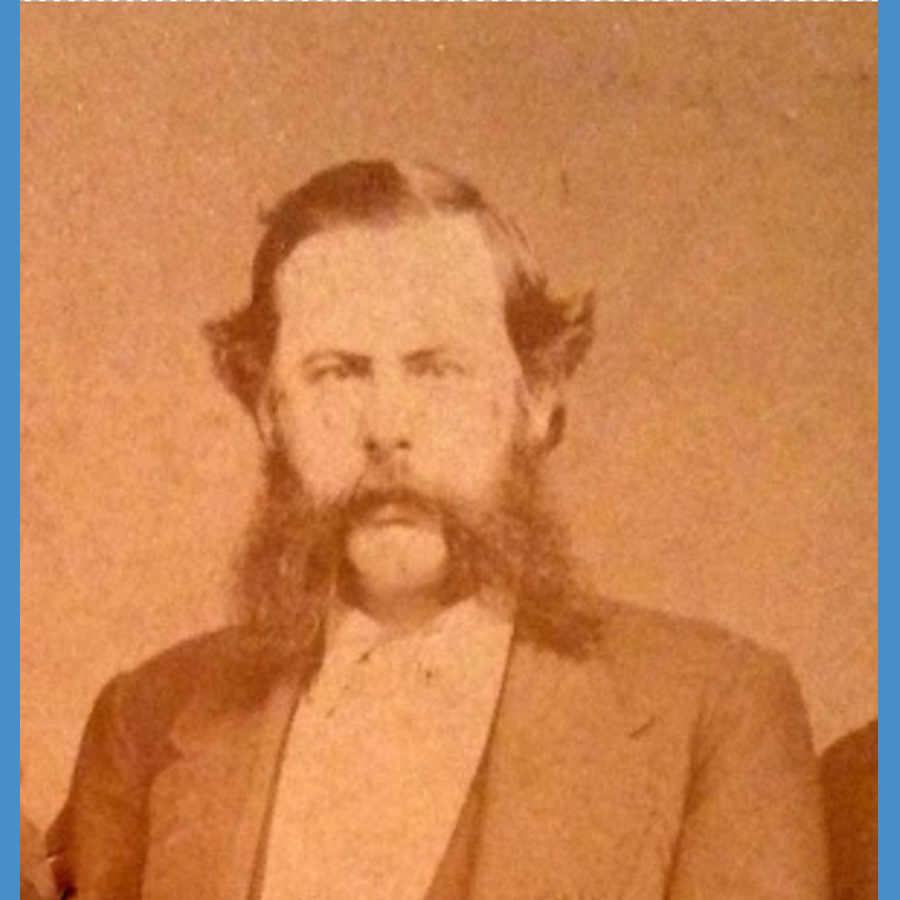 Renate Sanders, blog author of Into the Light, has contributed the following post as part of our ongoing “How I Solved It Series.” 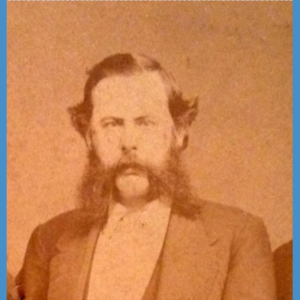 Here, she shares her experience digging for a nugget of truth in family lore. She found the answer in estate records and discovered how a shared name can lead to a century of misplaced blame.

I’m writing this post because I posted a newspaper obituary for one of my HAWKINS ancestors in one of my Facebook groups, this evening, and I mentioned that I was doing so, despite my disdain for this person. Of course, that led to a reader asking me to explain why I felt that way, so rather than give a long answer on FB, I decided to write this post.

When I began to research my GREEN line, many years ago, I heard about my 2x great-grandmother, Anna Green, for the first time. Most of what I initially learned of her came by way of interviews with my older cousins, Florine Green Edgerton and the late Harold Bruce Green, who were first cousins and had been told a few tidbits about Anna by their (shared) grandmother, Mary Helen “Pidgie” Green.  There weren’t many stories, but the one they both insisted upon, which was corroborated by another cousin, Dr. Virginia Green Edwards, was that Anna, a woman of mixed blood, had been in a long term relationship with a white man, whose name they thought was HAWKINS (it was), and that this man “loved” and took care of Anna and their 6 children, putting them up in nice home on his property. However, they also relayed to me that, when the Hawkins man died, “his father came and put Anna and the children off of the property”, leaving them with nothing.

Well, my early research led me to discover that the father of Anna’s children was Nathaniel Hawkins (my 2x great-grandfather), and that he died in 1879, the same year that the last of Anna’s children was born. What I also discovered, though, was that Nathaniel’s father, Philemon, had actually died in 1856, twenty-three years before Nathaniel’s death. So, that meant there was no way he could have put Anna and the children off of the property. I informed my older cousins of this truth, and though they were disappointed to learn that the story they thought they’d been told couldn’t have possibly been true, they accepted this as fact.

As most of us know, there is almost always at least a grain of truth to every instance of family lore, so I tucked this story away in my mind, but never completely forgot it. My research continued, and as the years went on I uncovered more and more details about the lives of my ancestral Hawkins family, as well as the descendants of Nathaniel and Anna, who all carried the surname, “Green” (since Anna and Nathaniel could not marry).

Eventually, my work led me to the estate records for Nathaniel, who’d died intestate. The Administrator for his estate was his first cousin, Philemon Benjamin Hawkins, a prominent attorney and legislative representative, who was married to his first cousin (Nathaniel’s sister), Fannie Martin Hawkins. During years of researching the Hawkins family, I’d read several newspaper accounts about this scoundrel Philemon B., some of which revealed him to be of less than admirable character. (To be fair, there were a few that were more positive, too.) From these articles, I developed a sense that he vehemently disliked blacks, but would use them, in a heartbeat, if it were advantageous to him in some way. Here’s an example of one such article: 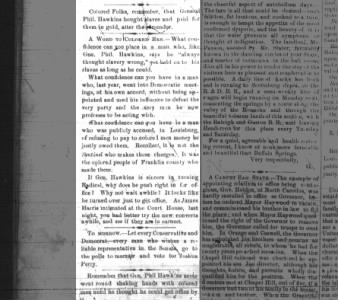 As I read through the many pages of Nathaniel’s estate files, and saw the rogue way he seemed to be handling some of the affairs, it suddenly hit me, one day. THIS is probably the man who put Anna and the children out of their home! It had to be Philemon B.! So, the family story was true, there’d just been a mix-up of the relationship (cousin/brother-in-law, not father) and which Philemon it was, given that Administrator of Nathaniel’s estate, had the same name as his father! It all made total sense, now!

So, as far as I’m concerned, this is the face of the man who stripped my great-great grandmother and her children of their home and security. I am still seeking documentary evidence of my suppositions, but, given that Philemon B. was in control of Nathaniel’s assets, and that (of course) there is no mention of Anna and/or his children, anywhere, it only makes sense that he used his position on the estate, along with his power in the county to get rid of any evidence of their existence in Nathaniel’s life, which is probably a contributing factor to why I am able to find so little about them, now. Furthermore, it appears that when Nathaniel’s mother, Jacobina Sherrod Hawkins, died a few years later, Philemon (with the support of his wife, Fanny) did some dirt on her estate, also. But, that’s another story….
This is not the clipping I posted on FB.
(Click to enlarge.) 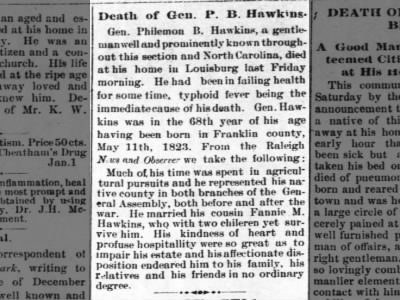 Philemon and his cousin/wife had two children, Bettie Lane and William J. William also died in 1891, shortly after his father. Bettie, who married Walter Blair Boyd, and lived in Warren County, NC. It doesn’t appear that the couple had any children; therefore, Bettie’s death in 1926 brought to an end the lineage of Philemon Benjamin Hawkins.

Renate Yarborough-Sanders is a genealogist, writer, speaker, and educator who has been documenting her family history for over 20 years. Renate, the descendant of formerly-enslaved ancestors, as well as slave owners and free people of color, is the author of two blogs: “Into the LIGHT” which focuses on her own family history; and, “Genea-Related”, which is a platform for presenting a variety of information of genealogical interest. She is a member of several genealogical societies and is an active participant in the online genealogy community. Renate is also a panelist on BlackProGen Live, a twice-monthly podcast featuring discussions of genealogical topics.

2 Responses to How I Solved It: A Detested Ancestor – Philemon Benjamin Hawkins