How I Solved It: The Micro-Biography of an Obituary 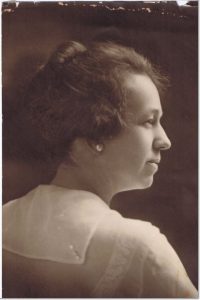 Jacqi Stevens, author of A Family Tapestry, finds abandoned old photographs and follows their story, hoping to reconnect the photos with their lost families. Here, Jacqi shares a few tricks and sources she uses for finding stories in digital obituaries and historical newspapers as part of RootsFinder’s “How I Solved It” guest blog series.

An indispensable tool of the genealogist’s trade is the obituary—as long as it is, hopefully, the micro-biography we expect it to be. There, we learn about a person’s occupations, interests and family. It is in that obituary that we gain clues perhaps not found anywhere else in our family history pursuit.

As far as my search for the story of the woman whose photograph collection I’ve stumbled upon, we’ve yet to touch on that research tool. So far, thanks to clues I’ve found on those hundred-year-old photographs from a Jackson, California, antique shop, I’ve learned more about their owner’s friends and neighbors than I have about the person who owned those photos, herself. It’s about time we take a moment to learn more about Thirza Browne Cole and her husband, William.

Granted, we did stumble upon Thirza’s childhood home in Greeley, Colorado, thanks to the inclusion of her name in the Browne household in the 1880 census. We also discovered the name of her siblings: Adelbert, Nellie and Mable. We managed to learn that the picture of baby Louise was actually a photo of Thirza’s niece. But other than that, all we know is that Thirza was someone who grew up in Colorado, married, and eventually moved to northern California.

It’s time to learn a bit more about Thirza, herself. Since we’ve yet to take a look at another traditional source of genealogical information—the obituary—we’ll start with that, today and tomorrow.

Finding someone’s obituary can sometimes be easy for researchers. Uncover the date of death, the location, and, thanks to the use of several newspaper archive subscription services—or, better yet, resources to find free access to old newspapers—pull up the very article as it was published.

Not so for people in Lodi, the California town where Thirza and her husband, William Cole, lived in their later years. Until the California Digital Newspaper Collection catches up with more recent dates, folks wishing to research ancestors from that modestly-sized city will either have to go there in person to crank through microfilm rolls, or be thankful that at least some of the editions of the Lodi News-Sentinel have been digitized through the auspices of Google News.

In the case of Thirza and her husband William, I looked up their dates of death, thanks to Ancestry’s California Death Index, and then held my breath while seeing whether those would be my lucky dates on Google News.

In William Cole’s case—the first of the Cole couple to pass away—I was indeed in luck and found the obituary quickly. William Edward Cole, the man who married Thirza Browne in Colorado, back in 1895, had lived in Lodi for thirty two years before his death on 13 July 1947. His obituary was published the very next day, Monday the fourteenth—on the front page.

During his almost seventy four years—William died two weeks before his birthday—he had seen the death of his only child, daughter Pauline Cole Lee in 1923, and her husband, Ralph Lee. Then, too, as one of six brothers, William had already lost the oldest and the youngest of his siblings. As obituaries often do, this brief article allows us to learn more about the Cole family constellation, and a bit about William’s life—and his wife’s interests—in the process.

William E. Cole, a native of Vermont, passed away on Sunday morning at the family home, 209 North School street. He was 74 years of age and death followed a short illness.
The deceased had made his home in Lodi for the past 32 years and is survived by his wife, Mrs. Thirza Cole, who has operated the Mason Hospital for the past 26 years. He was a member of the Salida, Colo., B.P.O.E. Lodge, having received his 25-year jewel.
In addition to his wife, the deceased leaves a foster son, Geo. I. Buck of Lodi and was the father of the late Mrs. Pauline B. Lee. Brothers surviving are Clifford C. Cole, Alberton, Montana; Howard H. Cole, Lodi, and Robert R. Cole, Oakland.
The funeral will be held Wednesday afternoon at 2 o’clock in the chapel of the Wells Funeral Home with Rev. A. R. Boone of the Congregational church officiating.

You can read Jacqi’s original post at http://afamilytapestry.blogspot.com/2018/04/the-micro-biography-of-obituary.html. If you’re curious to read more of the story about the woman in the photo Jacqi found, other posts about Thirza include:

If you have ideas or stories to share in our “How I Solved It” series, please let us know!’

It is my contention that, after a lifetime, one of the greatest needs people have is to be remembered. They want to know: have I made a difference? I write because I can't keep for myself the gifts others have entrusted to me. Through what I've already been given--though not forgetting those to whom I must pass this along--from family I receive my heritage; through family I leave a legacy. With family I weave a tapestry. These are my strands. Visit Jacqi's Website