How I Solved It: Celia’s Uncle Max and Family 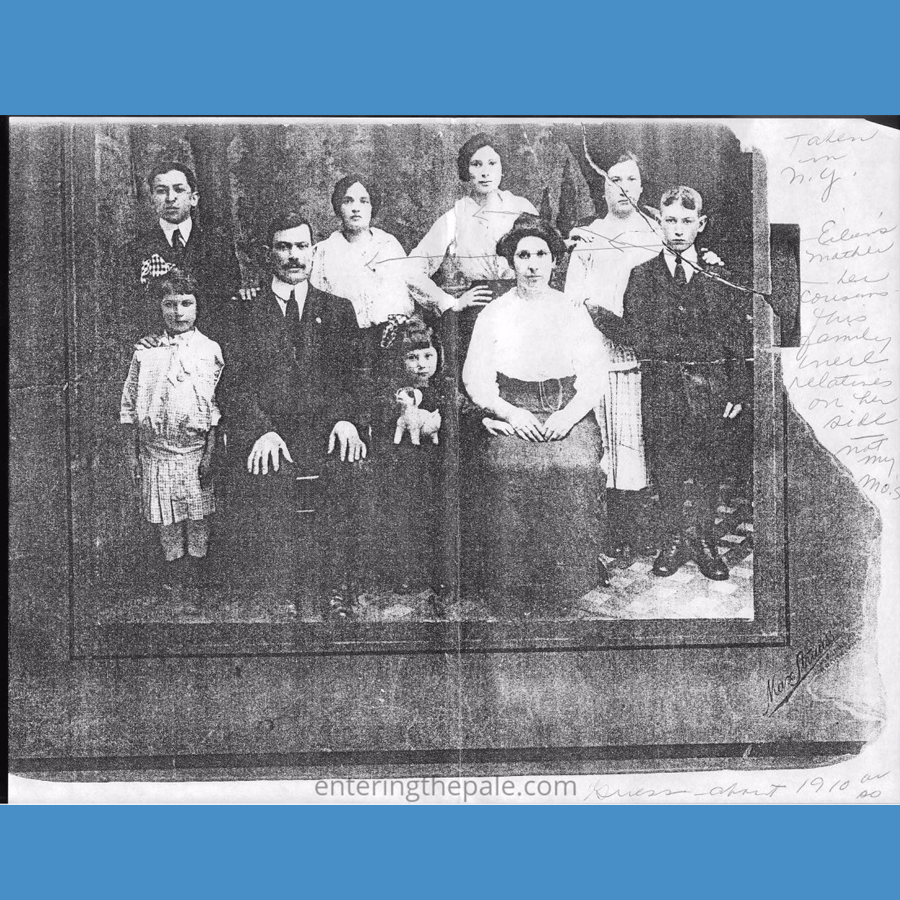 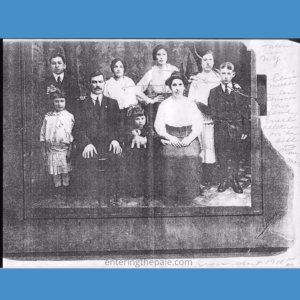 Luanne Castle, blog author of Entering the Pale, has shared this blog as part of our ongoing “How I Solved It Series”.

Here, Luanne follows the immigration journey of “Uncle Max” showing how important passenger lists and the citizenship papers of extended family members can be in locating a town of origin, and other important family clues.

If you remember from last week (trying to sound like a TV show here), Celia was traveling to the United States to her Uncle Max in Brooklyn. But who was this Uncle Max?

A few years ago, the gardener and I tried to find Uncle Max through Ancestry, but we couldn’t find him, based on the information available at the time. All we had to go by was a copier copy of a photograph that cousin Charlotte had given us. The handwriting is Charlotte’s. We tried to match up the children in the photo with families on the U.S. census reports. Notice that Celia Goodstein is in the back row, second from the left.

This is what it says:

Taken in N.Y. Eileen’s mother [arrow pointing to Celia] her cousins [arrows pointing to the other girls in the back row]

This family were relatives on her side, not my mother’s.

Since Charlotte’s mother was Malka Scheshko (Molly Riskin), and since she was not related to this family, we had to assume that the family was from the Goodstein side of the family. What we didn’t know was what their surname was. This made it very difficult to search.

As luck would have it, Uncle Max was a Goodstein. The surname was Gutstein (Gudstein, Gutshteyn) before it was Goodstein. The man in the photo is Max Goodstein, the brother of Celia’s father. I love how she’s standing just behind his shoulder.

While Max’s immigration records have not yet been located, his wife, Neche Gutstein, and children Reisel, Iankel, Ettel, and Itzchok were on the passenger list from Liverpool to NYC: 11 July 1907. They traveled 3rd class.

On the manifest for SS Celtic, which sailed that day, the listing is:

Notice that Golda, an infant, was not listed on the first document. What does that mean? It seems likely that Golda was born on the trip from Liverpool to NYC. Can you even imagine what Neche went through? And baby Golda, too. Makes me sad to think of how hard it was for them.

The name of the nearest relative in country whence alien came:

It looks as if it is possible that Max’s wife’s closest relative in Russia was Max’s mother Gittel Gutstein, located in Tiraspol! If this is the case, Celia’s grandmother’s name was Gittel Gutstein, and that would be the gardener’s 2x great-grandmother. 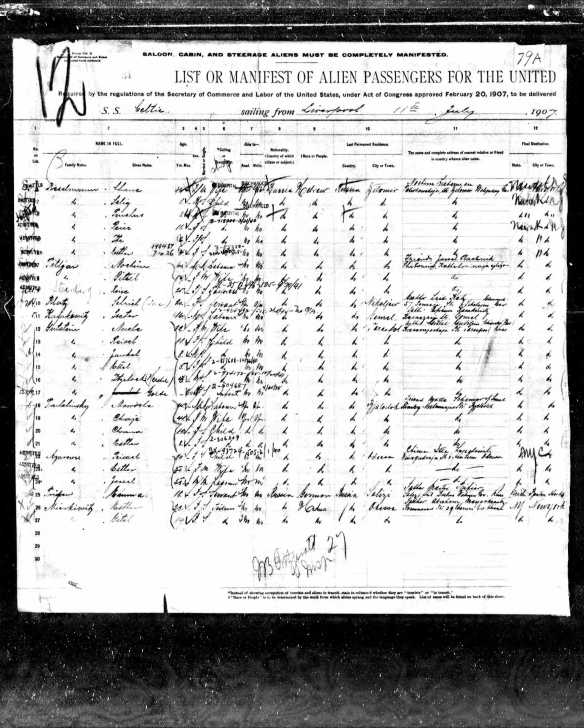 On this second page, it shows that Neche and children are joining her husband Max Gutstein at 349 Stone Avenue, Brooklyn, New York.

The next document is Max Goodstein’s Declaration of Intention to become a naturalized citizen from 1910.

This document gives some interesting information. For one thing, it gives his birthday as 6 March 1874, and states that he was born in Odessa, Russia! Again, Odessa! That means that both the Goodsteins AND the Scheshkos lived in both Odessa and Tiraspol. That seems like such a coincidence to me. Were there events that occurred that caused them to move from one place to other or back and forth? Maybe we will never know. If we can eventually map out a timeline, maybe it would be easier to research events.

Max was a tailor. He was also 5’6, so not a tall man. His 1910 Brooklyn address is listed. And, as of the filing of this document, Max was still a subject of Nicholas II, Emperor of All the Russias.That kind of makes me shudder.

On the 1910 census (so around the same time as the above document), Max Goodstein is listed at the 617 Sackman Street address of the declaration. His wife’s name is now listed as Anna, so Neche changed her name to Anna. The children are now Rose, Jacob, Ethel, Harry, Gertruda. They have all taken American names.

Look at the top of page 2 of the 1910 census. Nineteen-year-old Jennie Goodstein is listed as a daughter of Max and Anna! Celia must have tried out the name Jennie at the very beginning–or else her name was recorded in error.

So we have Celia now in the household of her Uncle Max and Aunt Anna. I wonder how comfortable she felt with them. She must have known them quite well from Tiraspol, so it wouldn’t have been as if she went to someone she barely knew–or didn’t know at all.

How did she get along with her cousins? Did they become like siblings to her? Or did they grow away from each other? Without a diary to read, some of these questions can never be answered. But I am always searching for clues.

To be continued again 🙂

Luanne Castle is an award-winning poet and blogger. Her poetry and prose chapbook, Kin Types, based on genealogical research, was published by Finishing Line Press in July 2017. Her first book, Doll God (Aldrich Press), was winner of the 2015 New Mexico-Arizona Book Award. Luanne has been a Fellow at the Center for Ideas and Society at the University of California, Riverside. She studied English, creative writing, and history at the University of California, Riverside (PhD); Western Michigan University (MA/MFA); and Stanford University. In addition to regularly publishing in journals and magazines, Luanne writes the family history blogs thefamilykalamazoo.com and enteringthepale.com , as well as the writing blog writersite.org. She divides her time between California and Arizona, where she shares land with a herd of javelina.