How I Solved It: Ancestry Shaking Leaf vs. Genealogy Brick Wall 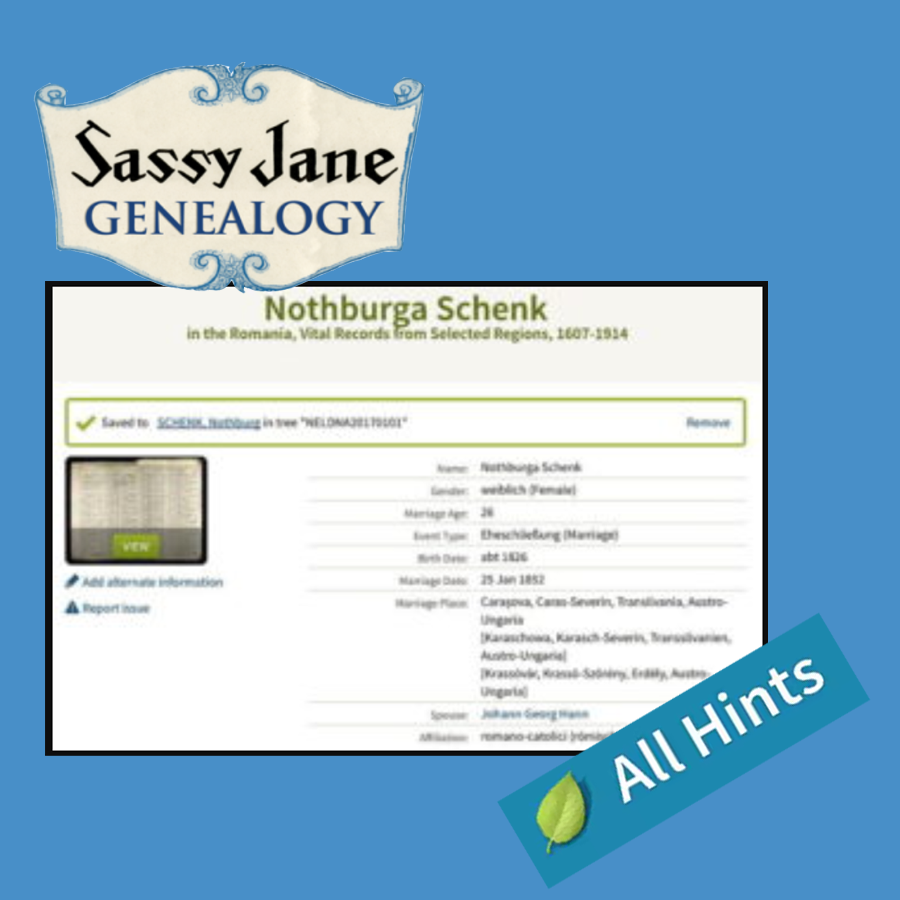 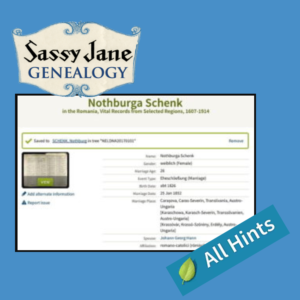 Nancy Loe, blog author from the website Sassy Jane Genealogy, has shared this blog as part of our ongoing “How I Solved It Series”.

This blog tells the story about how paying attention to a shaky leaf that originally she was hesitant to follow led her to break through a huge brick wall in her research.

My ten-year-old Austrian brick wall fell and a leafy branch sprouts in its place on my tree.* You may want to get a snack – or better yet a sleeping bag – for this long post about one special Ancestry shaking leaf popping up in my tree and the unusual records I found along the way looking for my elusive Austrian Hanns.

This new-to-me Ancestry database contained a hint for a marriage record for Nothburga Schenk and Johann Georg Hann in 1852. Those are my Austrian great-great-grandparents’ names. The date is right. But the place is crazy – 1300 kilometers away in Romania. This can’t be right. But then again, how many Nothburga Schenks were there in the world? 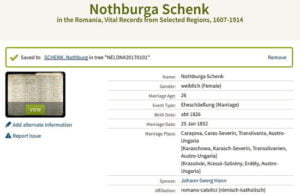 Does the Nothburga Schenk in this record match the person in my tree? 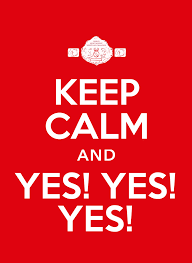 Even Nothburga and Johann Georg’s son, my great-grandfather Gottfried Hann, was mysterious at first. He never appears in the U.S. census because he arrived after 1880 and he died in 1896, two months before my grandmother was born. All my father knew was that his grandfather was Austrian, wore lederhosen on holidays, and his name was either Mannfried or Gottfried.

I got his death record from Cook County. On 17 Oct 1896, Gottfried died in Chicago at the age of 35. He was buried the following day at St. Boniface Catholic Cemetery in a term (rented) grave. When the family didn’t have the money to purchase the plot at the end of the rental period, the church buried his body deeper and resold the plot.The parish records had no entry for a funeral. On 30 Dec 1896, his posthumous daughter, my grandmother was born, leaving my Swedish great-grandmother, Anna Lovisa Hann, with three children under the age of five to raise on her own.

On a trip to the Midwest, I detoured to the Upper Peninsula of Michigan to do courthouse and parish research for his marriage. The Catholic Church did not allow access to their parish records, but a nun helped by writing down an abstract of the marriage record. The county also had a record of the marriage and the birth of their firstborn. But neither record revealed a birthplace for Gottfried.

No death notice appeared in the Chicago English-language papers, so I used Gottfried’s death date to find an obituary in a Chicago German-language newspaper. Finally, I had a birthplace at last: Ladis in the Tyrolean region.

The Hanns were Austrians Catholics whose records are unavailable here. So I hired the professional Genealogin Mag. Julia Pfeifer of the firm Historikerkanzlei Genealogisch-Historische Recherchen GmbH in Innsbruck. Three years ago she found many many generations of the Hanns for me. She even found a letter in the Innsbruck parish records from the Archdiocese in Chicago notifying the Austrian parish in Ladis that Gottfried had died.

But Gottfried’s mother (and my great-great-grandmother) Nothburga Schenk remained a mystery. Also, there was no baptism record for Gottfried in Ladis, but there was a confirmation record.

Here the story stops for three years. Until that Ancestry shaking leaf appeared in my tree a few weeks ago.

In the Ancestry.com Romanian database, I finally found my great-grandfather Gottfried’s elusive baptism record. He was born on 2 May 1861 in Anina, Caraș-Severin, Austro-Ungaria (now Romania). I found the baptisms of Gottfried’s siblings: Ignatius, Maria Aloisia, and Johannes.

And then I found Nothburga’s death record. She died at 38 of tuberculosis, leaving four small children and a widower behind in Romania. And her death record (at the beginning of this post) gave the farm and village where she was born in Austria. Gottfried, his father, and siblings returned to Ladis, Austria, where the Hanns were from.

I called on professional genealogists Mag. Pfeiffer again. She found Nothburga’s baptism on 27 Dec 1824 in the Schönwies Catholic parish records. That record included names of her parents. Because of discrimination against Romanians in Austria, Leonhard Schenk and Theresia Tragsail journeyed from the Tyrol to Rome to be married. The fathers of Leonhard and Theresia are recorded. Mag Pfeiffer notes that Leonhard and Theresia moved around a lot and practiced several trades, in addition to being devout Catholics.

And this is where I fainted and my husband had to get the smelling salts at the news that there were three generations behind that brick wall of mine, all found in one day.

So, thank you, Mag. Pfeiffer, for finding records in the Innsbruck diocese for me. Your persistence and skill and good humor wins the day. And thank you Ancestry for the ferocious algorithms that matched my Ancestry tree with that specific database.

Now I have a complete six-generation chart (in six European countries) at last and a complete seventh isn’t too far behind. Join me in the genealogy happy dance!

*Full disclosure: I’ve never been a fan of the Ancestry shaking leaf hints. I’ve seen too many friends and clients use them without understanding them. Result: complete confusion and snarly gnarly trees full of errors. But now I must admit one paid off for me. For more about using Ancestry shaking leaf hints successfully, click here. And click on the link for more unusual records in genealogy research.

Nancy Loe has been a professional genealogist working in libraries and archives for over four decades. She started Sassy Sassy Jane Genealogy in 2010 to promote her services to those wanting to start their own genealogy or simply seeking advice for brick walls. Visit Nancy's Website