How I Solved It: Returning to a Small Town in Scotland

In May 1863 in a small town in Scotland, Robert Henderson said goodbye to his father James and left for America. Robert’s mother Christian Dalziel had passed away about a year earlier. It’s unlikely that Robert ever saw his father again since James died a few years later, in March 1867. Locating James and Christian’s gravesite was one of the first things I did when I came to Scotland a few weeks ago.

Although I inherited quite a bit of family history from my great grandmother (who very kindly kept track of my great grandfather’s genealogy for him!), it’s just charts. Unfortunately I don’t have any personal papers from Scotland. The reality is that my ancestors probably didn’t have any to pass on, or didn’t think they would be worth keeping for the future. I want to know more about these people, and I want documentation and verification, since I’ve discovered errors in various other places along my tree. I need to know the information I inherited was correct. So while I’m in Scotland I’m on a quest to understand these people’s lives, to document and hopefully grow our family tree.

James’s 1867 death is recorded in the Statutory Registers of Scotland. He died in Penston, a small village in Gladsmuir parish. So with great curiosity and excitement, I went straight to the Gladsmuir parish church just outside Edinburgh and found the old cemetery. I took the bus from Edinburgh, and it let me off right in front of the church. The new(est) church is right along the street; the old(er) church and cemetery is in ruins around back.

Their headstone was difficult to find; it’s broken and weathered but I found it. Here were my last direct line ancestors to live and die in Scotland. It was an emotional moment for me, especially with my own father’s death still fresh in my heart. 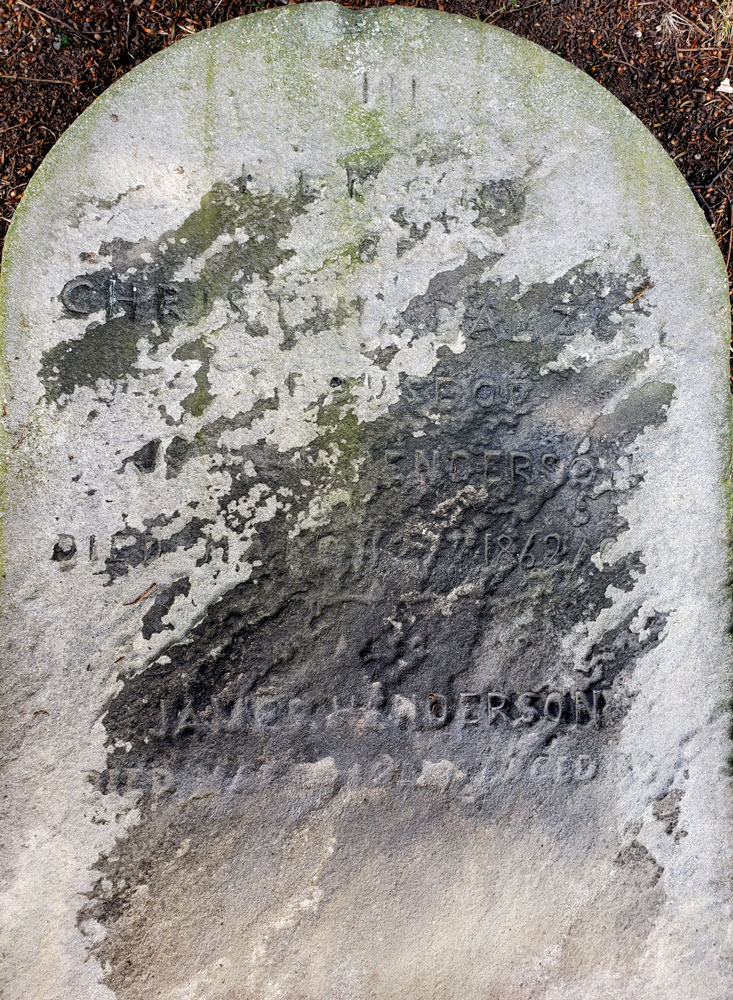 I know from James’s death record that he and his father, who was also named James, were miners. He died of chronic bronchitis (black lung, perhaps?) at the age of 80. Mining was a predominant occupation in the Gladsmuir area. But it looks like James’s occupation in life had evolved over the years. I traced James through census records to see what they had to say about his life. One census lists him as a carpenter, another a flesher (butcher), and another lists him as an engineer.

To gain more insight, I gathered christening records for each of the children of James and Christian I could find in the Old Parish Records Index, which gave me a timeline. With 10 children between 1811 and 1836 I watched the records paint a picture of James and Christian’s life over 25 years as James’s occupation went from from Wright in Henmuir, to Carpenter in Smuddle Ha, to Carpenter in Penston, then Collier in Penston, and finally Collier in Newtown.

James Henderson and Christian Dalziel had been married at the Canongate Church in Edinburgh on 19 March 1811. Their marriage record says “That James Henderson Wright Canongate and Christian Dizel [sic], Daughter of Thomas Dizel [sic] Wright Mussleburgh gave up their names for marriage — William Henderson Mason Edenr [Edinburgh] and Andrew Chisholm Wright there Witnesses.” A wright was a woodworker, so it appears that James was a carpenter from 1811 to about 1825, at which point he turned his hand to working coal. His occupation at the time of the 1841 census was Engineer, so perhaps he became an Engineer in the local mines at some point between 1819 and 1825, catching work where he could find it.

James was born in Gladsmuir parish, probably in Penston where his parents lived. His christening record says “James [Henderson] miner at Penston and Janet Lumsden his wife had a Son born the 17th of February 1787 and Baptized the 25th of said month by the Revd Mr Francis Cowan and named James. Witnesses Robert Henderson and William Lumsden.” Since James Jr. was from Penston, I imagine that he was married in Edinburgh in 1811 because he was there studying or working. Gladsmuir parish is not far from Edinburgh and he would have been 24 years old—old enough to begin making his own way in the world. James had an uncle named William who could very well have been the mason who witnessed the 1811 marriage in Canongate parish. I’ll be looking for clues about them in guild records soon since I did get some possible matches in Findmypast’s new Scotland, Burgess & Guild Brethren Index.

Armed with this information, I turned to the 1855 and 1865 valuation rolls to see if I could find exactly where James and Christian lived with their family in Penston after their children had all been born. It’s a very small town, but I want to know exactly which house(s) they called home. But I couldn’t find James in the valuation rolls. Instead, I found an Alexander Henderson of Longniddry who rented Penston Game. Is he related? Did James and Christian live with Alexander, or somewhere else? (General lodging for coal workers? I hope not. I’ve read terrible things about colliers’ housing and it saddens me to consider the state my ancestors may have been living in, but I have to consider this very real possibility.) I’ve started looking into it, and I don’t know yet. But I’m going to find out!

Using these records, I was able to plot James and Christian’s known locations on the 1853 Ordinance Survey Map (courtesy of the National Library of Scotland), and compare this to the modern area by overlaying the survey map with aerial footage from Google Maps and aligning the roads. I scoured maps, read the New Statistical Account of Scotland (published 1845) and also read survey notes and historical descriptions of the area at ScotlandsPlaces. In the Ordnance Survey Name Books I discovered that by 1854 there was nothing left of the old (original?) Gladsmuir Parish Church which once stood not far from Smuddle Ha and “there was a quantity of bones dug out of the small enclosure North of the present house this is said to have been the grave yard.” So, sadly, most likely any trace of my ancestors buried in Gladsmuir prior to the construction of the new(er) parish church in 1839, where James and Christian’s broken headstone lies, had been erased before 1854 and I will not be able to find their graves.

But I can now walk through the area and stand where they stood, remember, and honor them. It means a lot to me.

To keep going, and to make sure I’ve got the correct information further back in my tree I need to start using more specialized records now. Knowing that James was a wright, I will check guild records to see if there’s anything about him in Canongate, Musselburgh, or Haddington. And most importantly, I will now turn to Kirk Session records to see what information is waiting for me there.

Research in Scotland can be time consuming, vague, and expensive. Every answer leads to more questions. The repositories tend to be open only during hours when I need to be at work. Digital images are about $2 each, which adds up fast with big families and the necessary collateral line research. The Family History Centers in which to consult the free but “locked” digitized FamilySearch films are scarce and rarely open here.  There’s a long list of reasons why researching our ancestors is hard.

But that moment standing in front of my 5x-great grandparents’ headstone, my last ancestors in Scotland, was totally worth it. So this is just the beginning of my Henderson adventure. I’ll take a day off from work soon and head to the archives. I’m excited to see what further clues they hold.

1 Response to How I Solved It: Returning to a Small Town in Scotland