How I Solved It: Benjamin Merrill is not my grandfather?!? (Is he?)

Inspired by our “How I Solved It” guest bloggers, I’ve decided to dust off some old research logs and take a second look at some old problems. First up: my Merrill connection. During my trip to North Carolina for an NGS conference in Raleigh a few years ago, I did quite a bit of personal on-site wandering. I mean researching. Since the Merrill family was among the list of neglected North Carolina ancestors I decided this was the perfect time to make amends.

Also researched during this trip were the Hill, McClelland, Clark, and Lowe families. Stanfield, Bennett, and Smith were also on the list, but these were women’s lines which required investigation into their husbands first. (Lowe, Clark, and Merrill respectively.) I’ll write about each of these families later.

The trip began with getting lost. As usual. Actually, the trip began with the sudden realization that my flight was in two hours and frantic packing and phone calls while waiting for the taxi. But that is another story. Upon my arrival in Greensboro, I picked up the rental, bought a map, and pretended to know where I was. The drive from Greensboro to Asheboro and Asheboro to Lexington was very scenic along the back roads and I imagine that based on the sheer volume of square acreage covered and number of u-turns performed, I saw much of the territory my ancestors explored anyway. So it was ok.

First I went to the Guilford County Courthouse battle site. As usual, I was deeply moved to stand where so many men took bullets so that I could be free to appreciate their sacrifice. I had hoped to find a list of men who fought in the battle such as the series compiled by Bobby Gilmer Moss which I purchased at King’s Mountain and Cowpens a year or ten ago. But I couldn’t find one, so I put it on a mental list of things to find or do later.

From there I went to Asheboro, visited the library, tromped around in cemeteries quite a bit, and generally spun my wheels and achieved no measurable result other than happiness. Next on the list was Salisbury, the seat of Rowan County. I highly recommend the Rowan County Library in Salisbury. The librarian in the History Department upstairs was extremely knowledgeable about the area and founding families. She recognized Benjamin Merrill’s name right away and confirmed what I knew about his death. Which is that he was hung for being a Regulator.

In order to appreciate Benjamin’s death, an understanding of his life is required. In 1763, following the French and Indian War, the British crown found itself feeling rather broke. To their minds, they had just spent ghastly sums of money defending the Colonies, and the Colonies should therefore pay for it with taxes. To the Colonists, they had paid with blood, sweat, and tears. And anyway, they were broke too, especially on the frontier. Many families found themselves starving in the face of outrageous tax bills, while men such as GovernorTryon built luxurious houses and threw lavish parties. (which to the Governor’s mind was a pitiful attempt at maintaining the lifestyle he was born to) Adding insult to injury, corrupt government practices such as over-charging for marriage licenses, deed filings, etc. were rampant, unavoidable, and arbitrarily enforced.

Underscoring this was the fact that the people had no say in their government. There was no representation in parliamentary affairs in far-off London. By about 1764 the Carolina people had had enough, and wisely or not, they decided to regulate the government. Thus the Regulators were formed. Things came to a head at the Battle of Alamance in May 1771, where the Regulators were ultimately defeated and disbanded. Wikipedia even states “Delays prevented approximately 300 reinforcements under Captain Benjamin Merrill from arriving in time to help the rebel cause.” (http://en.wikipedia.org/wiki/Battle_of_Alamance)

And so the life of Benjamin Merrill came to an end. He was hung, and although he surely thought that his name would go down in history as a disgrace as he stood at the gallows, I feel exactly opposite. I’m proud of him…whether he’s my ancestor or not.

And here is where my blog pertains to my genealogy. I had previously believed that Benjamin Merrill had a daughter named Nancy born about 1756 who married Joseph Clark about 1778. After Joseph Clark’s death about 1793, Nancy remarried to Benjamin Mendenhall.

I believed Nancy was the daughter of Benjamin Merrill and Jemima Smith because published sources said so. Oops. I will name, and go into detail about necessary corrections to these publications, after I’ve finished and documented the correct ancestry of my Nancy Merrill.

At the Rowan County library I found a book Captain Benjamin Merrill and the Merrill Family of North Carolina by William Ernest Merrill, M.S. (which I probably had in Salt Lake all along, but that is beside the point. The point is that I failed to verify what was printed elsewhere). According to this source, Benjamin was married to Jemima Smith, as I had believed, but they did not have a daughter named Nancy. Uh-oh.

Since it was interesting, I went to the Jersey Settlement near Lexington anyway. (http://www.tamu.edu/ccbn/dewitt/mckstmerjersey.htm) Although it was looking like Benjamin might not be my ancestor after all, I was right there. Couldn’t pass it up. Again, I tromped around the cemetery happy as a clam and took pictures of the remaining Merrill family headstones just in case.

From there I went North working on other lines, but several days later stopped at the historical site of the Battle of Alamance on my way over to Raleigh. (http://www.nchistoricsites.org/Alamance/alamanc.htm)

Aside from being such an interesting place, the man there was incredibly helpful.

He pulled out a vertical file on Benjamin Merrill and although his photocopier was not working well, he made a copy of the whole file for me on his ink jet printer. What a pain for him, but I’m so super grateful and I promise it will not go to waste.

The documents in this vertical file include:

Based on the information contained in this file, it does appear that Benjamin did have a daughter named Nancy, but she did not marry Joseph Clark. This Nancy married Boyd McCrary. Not Joseph Clark or Benjamin Mendenhall. Also, my Nancy was believed to have been born about 1756. The Nancy in the family pedigree chart was born about 1751, with two other siblings born about the time “my” Nancy was believed to have been born. Although I can’t rule out a second (third?) marriage, and alternate birth years, it’s not seeming like this is my Nancy, if this family group sheet is to be believed. 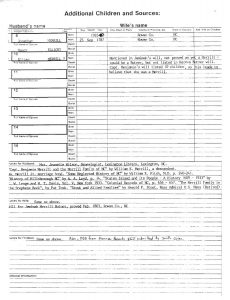 So, I have my work cut out for me. What can be gleaned from this trip is that Benjamin Merrill was probably not my direct line ancestor. There were several Merrill family members in the area; my job is to figure out which of them really was mine. Benjamin was probably an uncle or cousin. It’s quite a few generations back; I don’t know if DNA is going to be helpful on this one but I’m going to take a second look at this and see if a reasonably exhaustive, well documented search could have some answers.

24 Responses to How I Solved It: Benjamin Merrill is not my grandfather?!? (Is he?)